Sections in this page

This page is about an episode in the history of computers. Magiscan was a pioneering system for processing and measuring images by software. In the 1980s it was an innovative product from a small company, Joyce Loebl, based in Gateshead, in the North East of England. The design of the system came from a medical imaging group at Manchester University. As far as I can see there is currently hardly anything written on the Internet about this system. I worked for the company, developing software for Magiscan, so I decided it was time to rectify that omission. 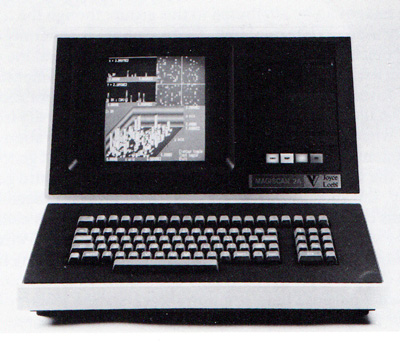 The company was founded in 1951 by two electrical engineering graduates, Robert Joyce and Herbert Loebl. It produced various scientific instruments having an electrical or electronic aspect to their design. The year before his death in 2013, Herbert Loebl was interviewed by the Newcastle-based daily newspaper, The Journal. The interview covered his background and interests including the early years of the company, Joyce Loebl. Here is a link to the article.

By the time I joined the company, in the autumn of 1982, it had become part of the medical instruments division of Vickers engineering group. Joyce Loebl really had two parts by then. One focussed on systems for defence, the other on more general instruments. I was involved in the latter.

The company's products had included a number of instruments for densitometry: measuring very accurately the amount of light passing through films, photographic or otherwise. Some of those instruments worked with a spot movable over a flat bed. Others used a rotating drum to scan the film.

It was realised that the output from a TV camera was similar in some ways to that from the scanners, although rather less accurate. So the idea was born of digitising the TV scan as a two-dimensional image to be held in computer memory. The vertical digitisation came simply from the scanning operation of the camera while the pixels along each line were obtained by electronic analogue-to-digital sampling at a fast rate. A complication was that TV cameras produced an interlaced scan: one field covering the odd-numbered lines, alternating with another field for the even lines. The UK TV standard by the 1970s comprised 625 lines and not all of those contained picture data, so the largest image we could usefully get was 512 lines high (a power of 2 was desirable for the computer). We sampled so that the image was 512 pixels wide and the pixels were square (which implied sampling at 64 nanoseconds per pixel). That allowed some useful fly-back time between lines and between fields. Digitisation was only accurate to 6 bits (64 levels). Colour cameras were very expensive so as standard we used monochrome cameras having plumbicon tubes. We did later deal with coloured (RGB) images.

The first Magiscan appeared in 1977. Its hardware was basically a PDP-11 minicomputer from Digital Equipment Corporation (DEC). That was a large floor-standing rack about 6 feet (2m) high. It used 8 inch (200mm) floppy discs with a maximum formatted capacity of only about 500 kilobytes. Digitising the analogue video input was done by special electronics. The innovative thing at that time was the idea of processing and measuring objects within the images by means of software rather than by special-purpose hardware.

The software design came from Christopher Taylor and his team in the Wolfson Image Analysis Unit in the Department of Medical Biophysics at the University of Manchester. The team quickly moved on from the general-purpose PDP-11 hardware to design their own minicomputer optimised for speed when processing images. This new version, Magiscan 2, was productionised and marketed by Joyce Loebl. It was launched in 1981. 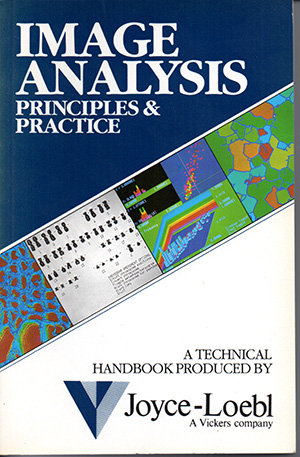 The second generation Magiscan was truly desk-top sized but, partly because it had a very rigid steel chassis, it definitely required more than one person to lift it.

My thanks to Ken Bell for finding me the link to the patent. Ken also worked on Magiscan, for longer than I did.

The processor was built from bit-slice chips, from AMD. The instruction word was 48 bits wide, divided into 3 sections: general CPU, image memory access processor (called the MAP) and execution control (branching to the next instruction). That the 3 parts were executed simultaneously was one method by which the machine gained speed over a general-purpose computer. It was reckoned to be about 16 times faster than the Apple II microcomputer. Of course, by today's standards it was slow but it was more than adequate for its serious applications at the time, in biomedical research, minerology, forensics, and other fields.

Application software was written in UCSD Pascal. That had been available on the Apple II (which is why that was mentioned as a comparison). The really useful feature of the UCSD programming system was that programs were partially compiled to something called p-code, each instruction of which was at quite a high level. The conciseness of p-code made it possible to run large applications in only 128 kilobytes of RAM. Memory was expensive and so that was all we had available in those days. UCSD p-code was a forerunner of the byte code used today in Java systems.

The team at the Wolfson Unit wrote an operating system to run the p-code instructions by writing at the microcode level. For that they developed a Microcode Assembler (MIASM) which also ran in the Apple II. So we had Apple IIs in the office to get the system off the ground. These later became Apple ///s for a while, with more memory and better performance.

The library of image processing routines developed as part of the operating system made it possible for owners of Magiscan 2 systems to write their own applications in UCSD Pascal. An important part of the design was the use of "pointsets" to describe the boundaries of objects by means of Freeman chain codes and the regions interior to those boundaries as lists of horizontal chords.

By 1982 the standard floppy disc size had shrunk to 5¼ inches (133mm) with a capacity of 720 kbytes. Initially Magiscan 2 had two such floppy disc drives next to its display screen. Soon it became possible to have "Winchester" hard disc drives to fit in the same 5-inch disc bays. I think they started with a "massive" 5 Mbytes capacity. One lucky member of our team was given the task of writing driver software for such devices, in microcode assembler. Magiscan 2A, illustrated above, was the version with one floppy disc and one hard disc.

One very neat feature of Magiscan 2 was its light pen. This was before the mouse had put in an appearance (it was still before the first IBM PCs). The light pen was connected by a wire to the video display electronics. It produced a large white spot on the screen which it detected as a feedback loop to gauge its position. Off to the left of the large spot was a short horizontal line and a single-pixel dot just off the end of that. It enabled users to draw and mark positions on the screen to single-pixel accuracy.

The selling price for Magiscan 2 systems started at about £30,000 (1980s prices). I remember that hospitals and associated research teams used to hold coffee mornings, raffles, jumble sales, etc in order to raise such large sums. There was no Internet to help with fund raising.

By the mid-1980s the IBM PC was becoming the standard for personal computing. We realised that there was no point in maintaining a completely separate operating system and user interface on the Magiscan. Instead we linked an IBM PC to a Magiscan in the form of a black box (well it was a tasteful shade of cream). Two monitors were used: one for the PC which displayed menus in a general MS-DOS user interface, the other connected to the Magiscan box for displaying images and for user interaction via the light pen. The higher levels of applications were still written in Pascal but now in the Microsoft version compiled under MS-DOS.

Article by a Magiscan 2 user - one of the very few references to Magiscan on the Internet at the time of writing.

One of the major applications of Magiscan, and surely one of the motives for developing the machine in the first place, was in the then newly developing field of chromosome karyotyping. We worked closely with a team at the Rigshospitalet in Copenhagen on this development. The team was led by Claes Lundsteen and an In Memoriam article (2004) about his work summarises the situation very well.

There were two main parts to the chromosome system:

There is more information about this and other applications in the Handbook, linked as above, including some relevant images. 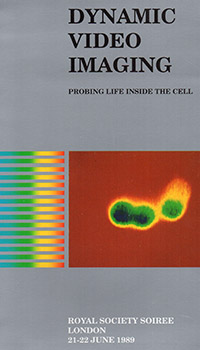 Around 1986 a significant new application area arose for us in biological research: imaging flourescent dyes in living cells to map the changing distribution of certain ions as the cells were stimulated. This entailed collecting sequences of microscope images over a period of time (generally a few seconds). The image memory therefore had to expand and we got up to 32 megabytes in Magiscan MD. The research area that was exciting the most interest was imaging Calcium ions and so we called our application MagiCal. The technique involved taking ratios of intensity at corresponding pixel positions in pairs of images taken through different wavelength filters (synchronising with a rotating filter wheel). Generally the wavelengths were in the ultraviolet so microscopes fitted with special UV-transmitting optics were required.

MagiCal was demonstrated at summer "soirées" at the Royal Society in London in 1989 and 1990.

Around the same time, the mid 1980s, Texas Instruments brought out the first in its TMS320 series of digital signal processors. These were aimed at telecommunications rather than image processing (1- rather than 2-dimensional signals). However we were not the only company to start using them for processing images and this led to a new series of products in a lower price and performance range than the full Magiscan. We called them Mini-Magiscan.

In 1987 there was a management buy-out from Vickers making Joyce Loebl Ltd a free-standing company.

At about the same time some of the Magiscan team moved to Manchester to join the original designers at Manchester University. They formed another company, Image Recognition Systems (IRS) based in Warrington [thanks to John Dourish for reminding me of the name, Nov 2019].

With the buy-out in 1991, the other half of Joyce Loebl, doing defence work, moved to another site and became Petards Joyce-Loebl which still exists as part of Petards Group plc.